Are you a remote professional or digital nomad wondering where to stay in Chiang Mai? Every neighborhood in the beautiful northern capital has a unique character and special traits, its own upsides and downsides, and some areas are better or worse for certain people depending on your needs, budget, and even line of work. We created this guide specifically for digital professionals, to help you discover the best neighborhoods for long-term stay in Chiang Mai.

It was tough, but we narrowed our list down to just four neighborhoods. The criteria we used to make this list were the following: affordability, centrality, ease of everyday living, and proximity to coworking spaces and other professional resources. We also ran a survey on digital professionals currently living in Chiang Mai to ensure that our results were not far off.

Although we ranked the neighborhoods 1 to 4, it is important to remember that there is no best neighborhood for digital professionals and that your decision should ultimately come down to your own needs and preferences.

Without further ado, here are the 4 best neighborhoods for digital professionals in Chiang Mai: 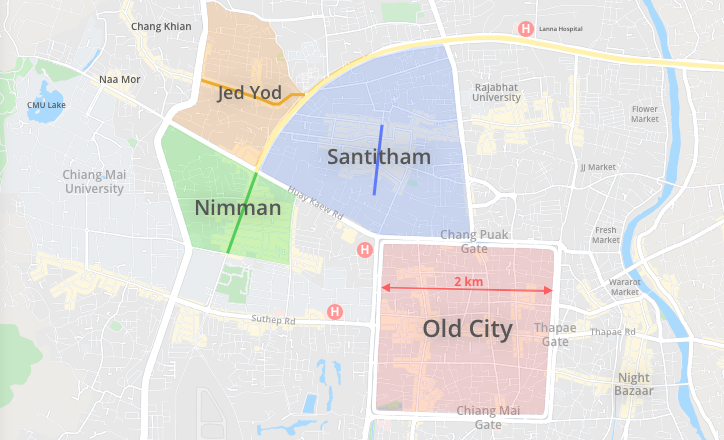 Let’s take a closer look at each neighborhood in turn.

When it comes to convenience for Chiang Mai digital nomads, there is no close second to Nimman. The namesake and central nervous system of the neighborhood, Nimmanhaemin Rd, is a bustling avenue that opens onto dozens of quaint alleyways lined with cafes, restaurants, bars, boutique shops, and coworking spaces. At the northern tip of the road, where it merges with the Super Highway, the colossal Maya Mall sits as the centerpiece of a new, trendier western side of Chiang Mai that has been growing steadily over the past decade.

One of the driving factors of this development is the influx of wealthy Chinese tourism and location-independent professionals from western countries (“digital nomads”) in recent years. Before then, Nimman was a food and nightlife hotspot for students studying nearby at Chiang Mai University, a trait the area still has today despite the growing tourism. These factors lend the neighborhood a nice mix of local charm and western convenience.

Although traffic can get quite bad at certain times, this fact is offset by the close proximity of everything in Nimman, which is perhaps the most walkable neighborhood in Chiang Mai. With myriad shops and Maya Mall nearby, you can find everything you need for everyday living without leaving the small network of alleyways surrounding Nimmanhaemin Road. At the same time, with the everpresent Suthep Mountain looming in the west—easily accessible via Huay Kaew Road—residents of this area never hurt for options when it comes to escaping the city and getting closer to nature. On Nimman’s western border, the Canal Rd leads quickly out of town to Mae Rim up north and Hang Dong down south.

Most importantly for digital professionals, Nimman is a great place to live because of the abundance of high-quality coworking spaces in the neighborhood such as Punspace Nimman and Hub53 Coworking. For those who sometimes tire of the coworking scene, there are dozens of nomad-friendly cafes where you can settle down to work for a few hours. Condominiums are also widely available, whether you are looking for a budget option ($250+ per month) or something more modern with a gym and/or pool ($400 and up). Short-term leases (one to six months) are common.

On the negative side, there are noisy airplanes continually passing overhead, the traffic can get bad at certain times of day where Nimmanhaemin Rd adjoins the Super Highway, and the cost of living is generally more expensive than other neighborhoods.

The Old City, a roughly two-kilometer square surrounded by moat and studded with ancient ruins at the corners, is the geographic, historic, and touristic center of Chiang Mai. There are scores of temples, cafes, restaurants, hotels, bars, and handicraft shops both inside and around the moat walls, making this one of the most lively areas of the city. The North, East, and South Gates of the square (called Chang Phuak, Thapae, and Chiang Mai Gates, respectively) are home to numerous markets every night of the week, with the famous Saturday Night Market and Sunday Walking Street on the weekends. The best features of the Old City are its liveliness, plethora of dining and drinking options, and centrality in the city.

If you are new to Chiang Mai, finding a place to live in the Old City can be a great way to get the pulse of the city. While there are surprisingly few condominiums and apartment buildings inside the moat walls, you will not have trouble finding a decent place if you contact one of several local real estate agencies (for example, Perfect Homes and Chiang Mai Properties).

For digital professionals, the Old City’s high-quality workspaces like Punspace and proximity to Nimman (10 min by motorbike) will be important factors when considering whether to move here. On the negative side, as mentioned, there are not many condos and apartment buildings in the area, the heavy tourism can get a bit tiring especially during high season, and the cost of living is only slightly cheaper than Nimman.

Unless you have lived in Chiang for a while, or have a local connection, you are less likely to hear about the next three neighborhoods on our list, which are far more Thai and less driven by tourism than Nimman and the Old City. You still see the odd traveler or expat, but the vast majority are ordinary Thai people making their daily rounds—and where Thais make their rounds, there is always a wide variety of street food and budget accommodations available, making these neighborhoods an ideal choice for those wishing to save money and dive deeper into the local life.

Santitham, a student area to the north that straddles Nimman and the Old City, equidistant to both, is one example. The neighborhood is centered on the lively food-court roundabout on Santitham Road, the main channel from which branch out numerous smaller sois lined with food stalls, cafes, bars, and small shops selling everything you can imagine. Since the neighborhood is between Chiang Mai University to the west and Rajabhat University to the east, the Santitham crowd is generally younger, more hip, and quite friendly, although generally less able to converse in English. There are a good number of cheap if slightly spartan “serviced apartments” (basically long-term hotel rooms with a refrigerator) which can be rented in the area, some for as little as THB 3,500, as well as higher-end but still affordable condominiums like the Nakornping and Hillside 4 on Huay Kaew Road.

With its affordability and the fact that Nimman and the Old City are merely a hop and skip away, it is clear why Santitham is becoming an increasingly popular neighborhood for digital professionals living in Chiang Mai. The only downside of the neighborhood is that in some parts it is quite crowded, noisy, and rough around the edges, although for some people these qualities only add to Santitham’s charm.

Jed Yod, a small neighborhood across the Super Highway from Santitham, falls into a similar category in that it is very Thai and has a large variety of street food and cheap accommodations available. Unlike the more centrally located Santitham, it is less crowded and has a quieter, more relaxed vibe.

The main action of the neighborhood is at Jed Yod Plaza, a roundabout which turns into a busy food court each night around 5 pm. On the main Jed Yod Road and its tributaries, there are tons of tiny open-air restaurants, hotpots and barbecues, food stalls, cafes, convenience stores, and miscellaneous shops. Like Santitham, Jed Yod is situated between several universities and thus attracts a large number of students who enjoy eating and drinking along the main road in the evening. Once you venture off the main road, most of the neighborhood consists is small, leafy streets and detached houses. The condominiums in the neighborhood sit mainly on Jed Yod Road, as well as several others on Canal Road, and can be rented for between THB 4,000-15,000.

The big difference between Santitham and Jed Yod, aside from the crowdedness, is that Jed Yod feels much closer to nature with the mountain always present to the west. Like Santitham it is very close to Nimman, but unlike Santitham you are much closer to other areas closer to the mountain and around the university, for example, Chang Khian and Naa Mor. Chang Khian, the neighborhood just across Canal Rd from Jed Yod, is a sleepy but charming neighborhood with small restaurants and cafes on the road up the mountain. Naa Mor (which in Thai means “in front of the university”) is a covered food, clothes, and cosmetics market geared towards students.

With Nimman, Santitham, Chang Khian, and Naa Mor so close by, Jed Yod is an excellent place to live for those who want cheap but decent accommodations and a quieter, small-town vibe.